CCCGA recently squeezed in a visit with the very busy Will and Willie Stearns of Southers Marsh for a chat about all things cranberry, golf and family.

Their cranberry story spans four generations, the William B. Stearnses I thru IV and their families. The two eldest (WBS I and II--Bill & Bill Jr.) and their wives bought Southers Marsh together in the early 1950s. Bill Jr. and Martha then purchased more cranberry acreage, including Watercourse, Pinnacle, and Dugaway bogs in Plymouth, and Goose Pond in Carver. In the early 60s Bill Jr. opened Stearns Irrigation to help finance the education of their three children. He and Martha purchased the 100 acre Indian Brook Bogs in Manomet in the mid-seventies, and in 1973 they sold Southers Marsh to WBS III, or Will as he is known, and Nancy. Confused yet? Willie (WBS IV) came along in 1973, graduated from Harvard in 1995, and then worked in NYC for three years on the Mercantile Exchange. In 1998, on the advice of his father, WBS IV then moved back home to pursue his future in the cranberry industry. That year he bought Goose Pond from his grandparents and the adjoining house from Uncle Jack Heywood of Stearns irrigation. Unfortunately, his timing was just one year shy of the collapse of cranberry business. (Willie did suggest that perhaps his father should keep his great ideas to himself!) 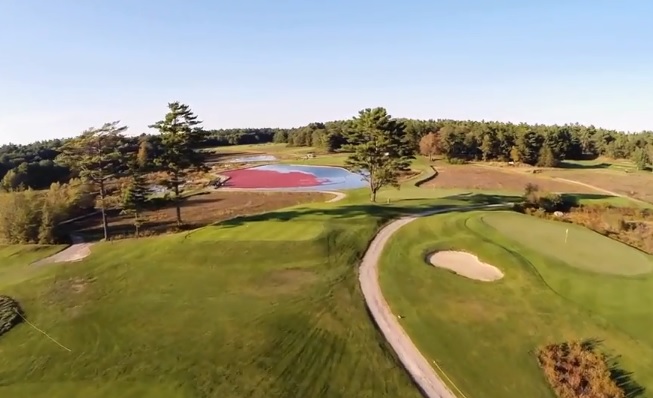 Will and Willie and their families had to find a way to diversify to survive this crash. They called a family meeting and everyone (Nancy, daughters Betsy & Laura, WBS IV) was given a week to come up with five options that they could pursue to keep their land viable. Here is where golf comes in. In 1995, they had to seed grass around a newly planted two-acre piece of Stevens to prevent erosion. Will figured they were “spending so much money trying to kill grass on the bogs, how hard could it be to grow it on purpose.” To make it fun they decided to plant two greens on each side of the new bog and whack golf balls back and forth. They built four greens and used to play in waders after work, sometimes playing in more dirt than grass. The following year they put in one more green and two fairways which meant they could play as nine holes! When the cranberry crash happened, one option was to expand the golf—and the rest, as they say, is history. 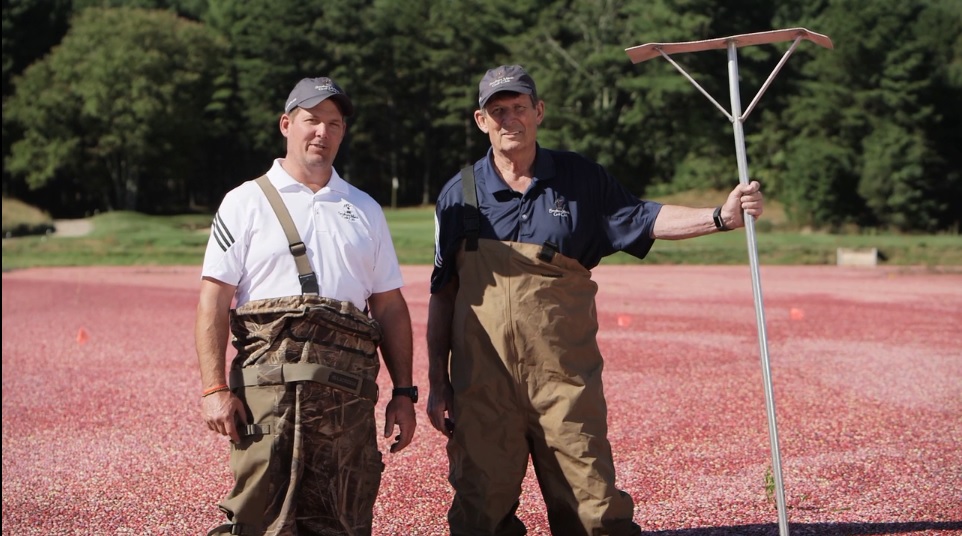 In March 2000 they started building the golf course that would become today’s Southers Marsh Golf Club. They hired someone to design the greens but did most of the building themselves. Will really enjoyed building the course. They put in all their own irrigation, and Will told us he that sitting in his CAT D5 moving dirt all day was fun for him. He told us how Bill used to come out during construction with his clipboard and point out everything that they needed to do. Southers Marsh Golf Club opened on July 7, 2001 (Will’s birthday).

Like most kids who grew up on the bogs, Will remembers jumping ditches for fun and doing lots of skating in winter; hockey is a favorite sport of all the Stearns generations today. Chuckling, Will also recalled that one Easter Sunday when he was about 11, the family went out and flagged a piece at Pinnacle for sprinkler heads instead of going to church. (At that time, sprinklers were just starting to revolutionize cranberry farming by eliminating the need for flooding for frost protection, so Bill hoped God would understand.) Later on, when he was a father with young children, Will told us it wasn’t uncommon for his Dad to call him at 4:30-5:00 am because he “had a great idea,” even though Will would be at work in another couple hours.

Being a cranberry grower is what Willie always wanted to be. He started helping with the harvest at age 9. Humorously, his dad told us about finding the smallest waders they could for Willie, but because they were still so big and Willie didn’t weight them down enough, they would fill up with air and he would constantly start rolling over in the water. In the early 1990s, Will thought cranberries might have been the perfect job. He was planning to build 25 more acres of bogs at Southers Marsh and a few years later, Willie moved back to help--just in time for the crash. "Great timing” Will joked.

Merging the cranberry and golf businesses has been a challenge. Both are full-time jobs, and the hardest part is doing the cranberry business part-time when golf is daily. There is ALWAYS something to be done and juggling it all requires a very cooperative family, Willie says. It’s challenging to fit in all they want to do on the bogs when golf customers must come first. Southers Marsh puts on 100 golf tournaments and 15 to 20 weddings a year. Because the golf club is dependent on repeat business, the Stearnses must ensure everyone has a great experience when they are there. Will says if “everyone has a smile on their face when they leave” then they have done their jobs. It is a terrific environment—everyone comes to have fun, and the Stearnses have also made it a point when hiring employees to surround themselves with happy people. They also spread that positive energy by way of all the golf balls that end up in the bogs, reselling them and giving the proceeds to the Boys & Girls Club of Plymouth. So if you have lost a ball or two into the bog instead of hitting the green, rest assured your ball will become part of something bigger! 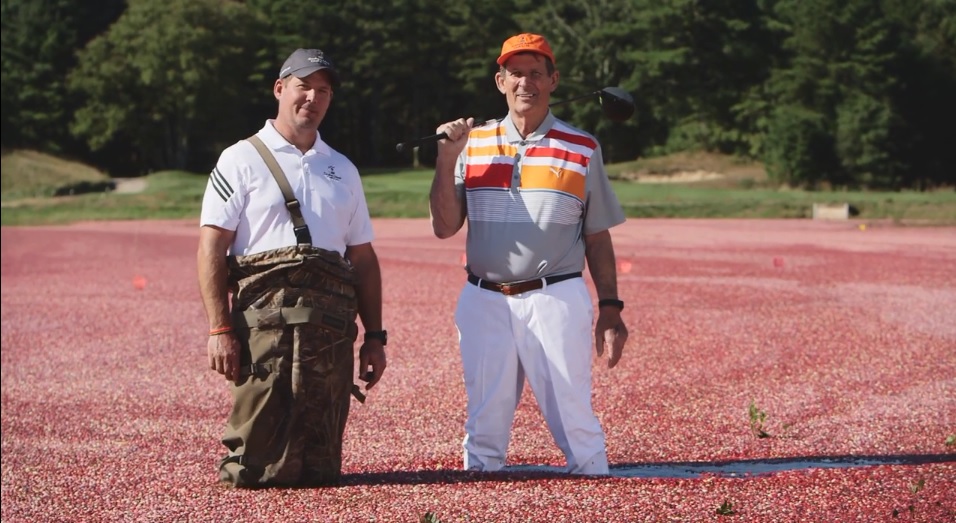 In talking with Will and Willie, it’s clear that one of their favorite parts of operating the golf club is coming up with their annual TV ad. They create the commercial themselves and it is released each year on Super Bowl Sunday—not on national TV, but you can still watch it locally on ESPN! (If you have a great idea, they are currently soliciting ideas for the next one!)

Both businesses are truly a family affair. Everyone is involved during harvest season on the bogs. At the golf club, Laura is the wedding coordinator and her husband, Ted Flynn, is the mechanic. Betsy does all the fruit carvings for events and her husband, JD Marks, does everything Will & Willie do at both businesses. Willie's older daughter, Maddy (13), has just started helping at the golf club, and we’re told his younger daughter, Lucy (10), can drive a golf cart better than the teenagers. Will and Nancy, with their children and spouses, and seven grandchildren, are now a family of 15. They've developed a tradition of holding a big family dinner every Wednesday night. Will says “you can’t put a value on family working together and tackling situations together that come up."

The Stearnses, who have been Ocean Spray growers for more than 60 years, farmed Early Blacks and Stevens, and in 2008, started renovating about half of their acreage to the new hybrid varieties. Both Wills have worked outside of the cranberry business but prefer it over anything else. Being your own boss and doing something different every day appeals to them the most. On any given day these jacks-of-all-trades may take on the roles of carpenter, personnel manager, cook, handyman, agronomist and more—but whatever it is, it is never boring. This concept of combining the two businesses continues to work well for the Stearns family. Will loves being on a water picker during harvest but there is always the chance of someone lining up to tee off right in his direction—a different kind of "hazard." Visitors to Southers Marsh find golfing around a cranberry bog to be a unique and appealing experience. And, while Will jokes that sometimes “it’s a lot easier to talk to frogs,” they enjoy every minute of being the owners of a golf course nestled within their first love of cranberries. As they say in their commercials, “Southers Marsh—it’s the berries!” 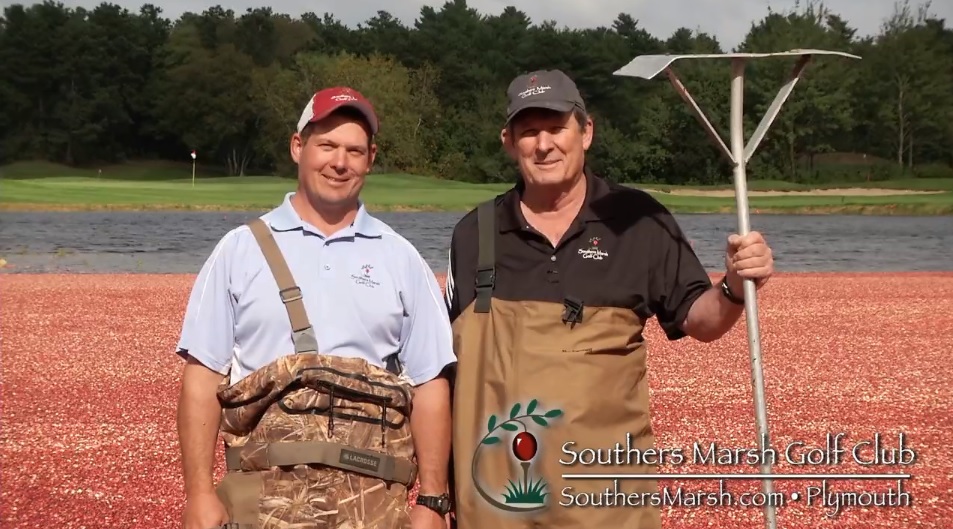