Tucked off Glen Charlie Road in Wareham are the bogs owned and farmed by Bill and Louise Scott. These bogs have been in Louise’s family since they were built in the early 1900s when her great-grandparents, Benjamin and Sarah Westgate, first acquired the land. 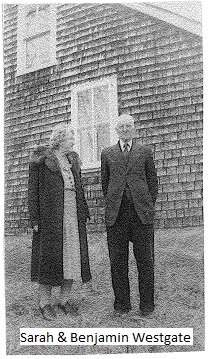 The original handwritten deed for the 24 total acres of land was made out to Sarah for $1.00 and is still in the Scotts possession. 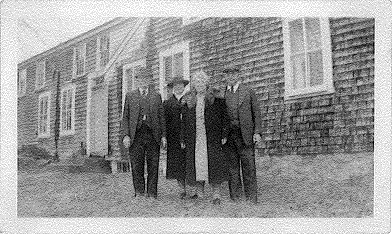 At the time Benjamin was building his bogs, Agawam Light & Power maintained the water that flowed to the bog.  A dam was created on the Agawam River which formed Muddy Pond and Glen Charlie Pond. This is currently the source of water for Glen Charlie bogs.

From the outset, Benjamin farmed and hand-picked Howes and Early Black cranberry varietals.  The berries from Glen Charlie have always been sold to Ocean Spray.  Louise told us they have one of the earliest Ocean Spray Cranberry stock certificates.

Benjamin handed down the business to his grandson, Walton Earle Westgate, Louise’s father.  Walton Earle worked at the Carver Cotton Gin Mill as a shipper & receiver. He and his wife, Norma, used to travel in their motorhome during the summer months up and down the east coast. They kept a photo album handy during these trips with all their cranberry pictures to show people and educate them about cranberries.  During the early 1950s, the Westgates used wooden scoops for harvesting.  One day in 1952, Louise recounts, they went in for lunch leaving the scoops by the side of the road and came back out to find the scoops were gone! Apparently some passerby must’ve wanted one for a decoration.  Walton moved the operation away from a hand-picked to a machine picked harvest.  He bought a Darlington Cranberry Dry Harvester which the Scotts still have.  He built a ramp to the barn where the empty bins would be waiting and they would dump the bags into the bins and then move the bins onto the trucks to transport to Ocean Spray in Middleboro. 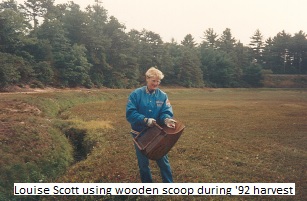 Louise and Bill were married in 1963. In talking to Bill, he is clearly a man that can tackle any situation and a virtual jack-of-all-trades. Bill grew up in Hanson and was neighbors with Alton Smith, a foreman for 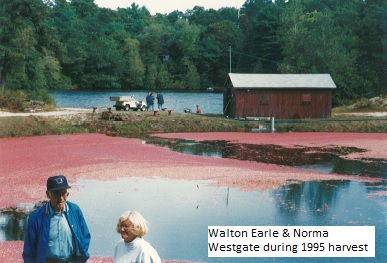 United Cape Cod Cranberry Company.  This is where Bill got his first taste of cranberry farming. He remembers the 3am wakeup calls (that is, Alton tapping on his window) when the wind died down, the two would go out with a trailer and spray the small bogs where the bi-wing planes couldn’t get in close enough to spray the pesticides on the bogs. Working in construction when they were married, Bill changed careers in 1966 when he joined the Hanson police department.  He has now been a public servant for 51 years. He served as a police officer in Hanson, Hanover and Halifax where he retired as Police Chief in 1990.  After his retirement, Bill served as Deputy Sheriff and then chief of security at South Shore Plaza before eventually moving out of law enforcement and into sales of police equipment.  There were no set hours, so Bill had the opportunity to work the bogs in conjunction with his job.  Since his retirement he has also served as a Selectman in the town of Hanson and remains a member of the Plymouth County Police Chiefs Association.

Bill is thankful for the help he received from his fellow growers throughout the early years running the bogs.  He worked for 2 ½ years helping John Ridder build bogs and that gave him valuable learning opportunities. He took over management of Glen Charlie Cranberries in 1996 and switched to water picking.  The Scotts like to say they “sold the wheelbarrow and bought a truck” to make the business more productive.  Bill bought a decaying Peterbuilt flat-bed and transformed it into a cranberry hauling truck.  The truck could hold 300 barrels and he used to haul barrels for other growers as well. 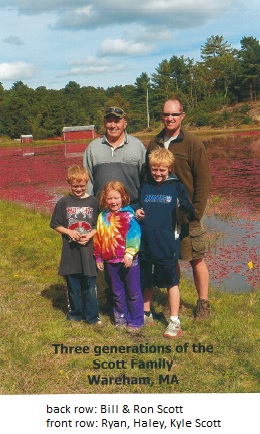 Due to the nature of the business, saving money and supplementing a grower’s income tend to be a way of life.  Glen Charlie Cranberries has a sander and Bill can make his own screened sand so they can save by not buying sand.  The Scotts have looked into solar and even a cell tower.  Their younger son, Ron, has installed solar along a defunct bog.

The future looks bright for Glen Charlie Cranberries.  Bill and Louise are the proud parents of two sons, Steve and Ron.  Steve is an Insurance Adjuster and is the defensive coordinator for Curry College football.  Ron, a mechanical engineer, is quite interested in the workings of the farm and will probably take over when Bill feels the time is right to let go of the reigns.  The Scotts have three grandchildren (Kyle, Ryan and Haley) who love to drive the Gator utility vehicle around the bogs.  They are always there to help at harvest time and are getting a great foundation as the youngest generation of Glen Charlie Cranberries.