Steve Ward is not just a cranberry farmer.  He is also a great supporter of Massachusetts cranberries. CCCGA recently sat down with Steve to talk about his background in farming and his involvement in advocating for the industry.

Steve’s entry into the world of cranberry farming was all due to his dad, Dick Ward. In 1975, Dick bought 3 acres of bog with the goal to use them for exercise. You see, Dick was a physical education teacher and believed in doing everything physically. Steve told us in the beginning they did all the work by hand—no machines—and there were always chores to do. He would come home from school excited to go frog hunting. Some days the chores would be the priority and they would be building bogs, cutting firewood or ditch digging. He got quite good at ‘driving’ a wheelbarrow! Steve remembers one year when he was on the high school wrestling team, of which Dick was the coach, they had built a bog sander but did not have a loader. Dick hired the wrestlers to work 3-hour sessions loading the sander. Steve recalls having 4 to 6 wrestlers per shift and they used snow shovels for the task. Dick timed them and they got to a point where it took only 90 seconds to fill the sander each time. From their entry into the cranberry scene, the Wards continued to add acreage 1-2 acres at a time. The family built a log cabin on the property and, when Dick got up to 14 acres, he figured that was a good size to have for retirement. Throughout these years, Steve worked with his dad and caught the “cranberry bug”!

Even though his interest in cranberry farming had been planted, Steve had a desire to spread his wings after high school. He worked as a forest ranger for a couple summers and then was employed by a small medical device company as the office manager and worked his way up to treasurer. Eventually he went to work for his father and Bob Alberghini doing pesticide spraying part-time. When Dick took over the pesticide business as Carver Cran Spray, Steve moved to full-time and worked with his dad from 1987-1997.  Then, as a result of the cranberry industry crash, he went to work for Doug & Peter Beaton.

In 2006, Steve went to work as an appraiser for Farm Credit. A month later he was offered a bog to manage. He found it challenging to manage the hours of both jobs.  In 2008 he went to apply for loan at USDA/FSA and learned the county’s Executive Director position was open. It offered a flexible schedule and Steve ended up with the job. His hope, at the time, was to become a full-time grower and stay at FSA only 5 years…but that never happened. Steve served as Executive Director for 11 years but found it tough to balance the workload of USDA and that of a grower. This year he made the move to leave FSA and go back to work for the Beaton family at Sure Cran. He says it has been nice to be able to focus just on cranberries. 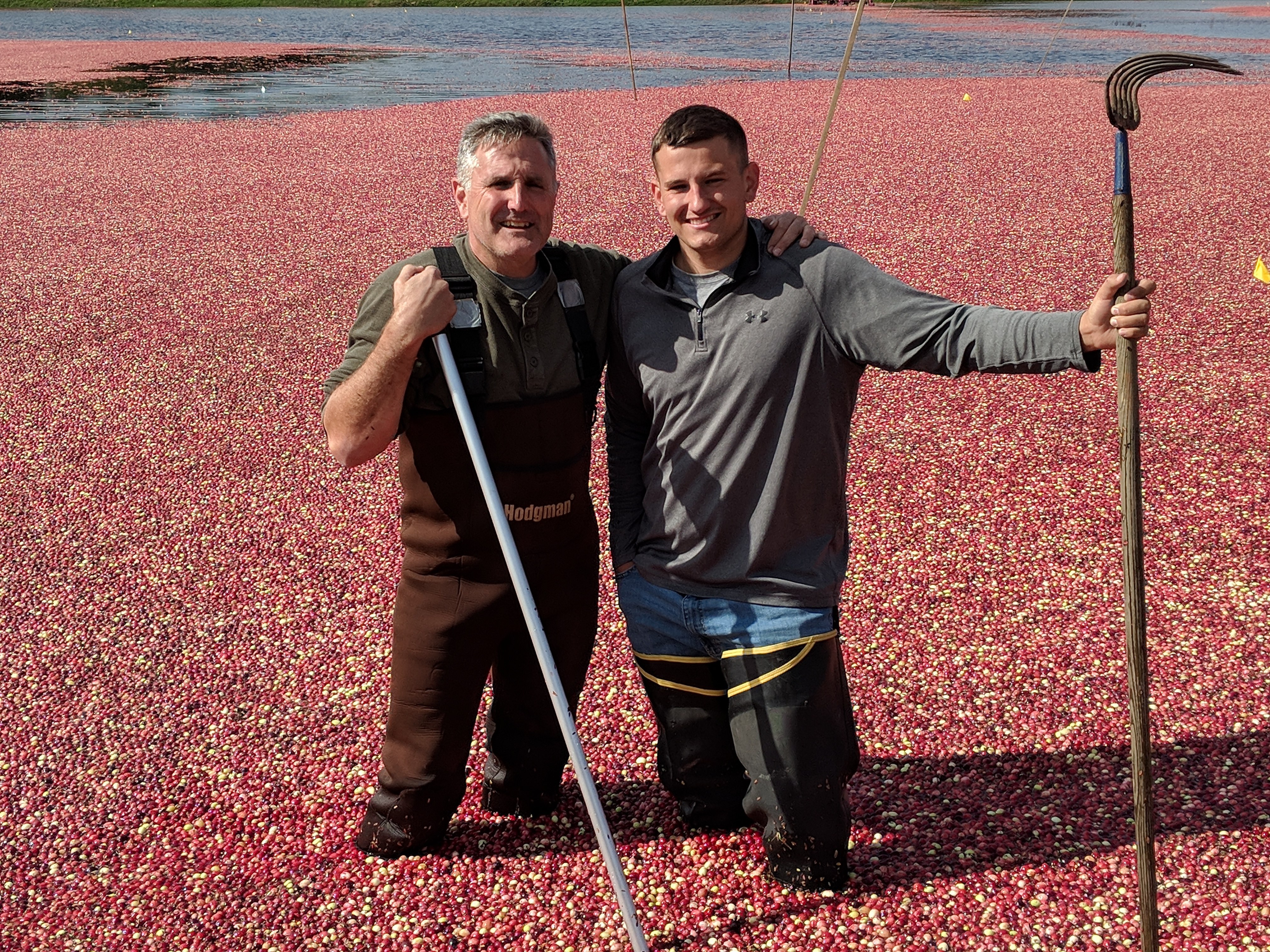 Steve currently has 57 acres in Middleboro and 6 in Carver. Up until 10 years ago, the Wards always dry-picked their crop but then switched to a wet harvest. They tried to switch back a few years ago, but it was hard to get the right conditions and the people to help harvest. His son, Justin, caught the cranberry bug and is buying his own bog so now there will be three generations of Ward cranberry men farming.

Away from the bogs, Steve keeps very busy on various boards and committees. He is on the CCCGA Board of Directors and serves as the Chair of the Environmental & Government Affairs Committee. Additionally, he is on the Farm Bureau Board, the State Pesticide Board and was recently elected to the Cranberry Institute Board of Directors.  Steve says he feels he needs to give back for all the things prior growers have done for us. “They’ve worked hard to create the unity that the cranberry industry has. We need to keep that going on for future generations. Very proud of that.”

As Environmental & Government Affairs Committee chairman, he gets such a good feeling from touching base and talking to legislators.  It is so important to make sure they understand the industry so they make decisions to better the industry and not to make decisions that hurt farming. “If they are not aware of what our struggles are, they could make decisions that would put us out of business.” Steve believes the legislators need to have someone to go to who understands the needs or potential for harm. He says CCCGA is very well organized and when legislators think of cranberries this is where they come. “We want to be top of mind for any organization that is farming.” Lobbyists are an avenue for legislators to learn the info needed to make decisions.  What keeps him inspired to be part of all of these boards can be summed up in the words of the Association’s previous Government Affairs Director, Henry Gillet: “If you’re not at the table, you’re on the table.”

Steve’s role on the Pesticide Board is a Governor’s appointed position. The Board is a protector of the public, so to speak, and Steve is one of only two farm members on the board.  He says more recent decisions made by the board have been helpful for farmers and that is related to having farmers at the table. Working together is also key to his involvement with the Farm Bureau because it ties cranberry growers in with other agricultural commodities. Steve says “we don’t want friction between commodities. There are 6 million members of the American Farm Bureau and we need to make sure we keep that unity so we have a large voice nationally.  Cranberries are mentioned more often than we realize at the national level.”

One thing Steve loves doing is giving tours. He is a big proponent of the ‘kill 2 birds with 1 stone’ mentality and tours offer three birds, so to speak. First tours give him a ‘high’ because he likes talking to people, especially going out in the water and letting them experience harvesting cranberries. His favorite thing about it is that it lets him see the industry through someone else’s eyes. And just about everyone who comes through thinks it the coolest thing ever! Second, tours offer the opportunity to spread the word about cranberries. And third, the picking gets done.

Looking at the MA cranberry growing industry, Steve notes that there are a lot of challenges facing growers. Growers are getting older and it’s harder to do what they’ve always done.  Collectively they want next generation to be able to move up and take over but there doesn’t seem to be a light at the end of the tunnel. “We have to turn over every stone looking for every possible opportunity.”  Pressures from neighbors and government plus a whole bunch of little things all add up to daily challenges facing the grower. “And” Steve says, “we have turn this back around to show how important it is to stay organized and keep the Association strong so we can stay pro-active and keep putting out the fires.”

Despite the many challenges, Steve remains optimistic for the future. He feels using technology and rebuilding bogs is going to have to be super priority. Steve says there are a lot of good things happening as a result of the crisis that are going to start paying dividends in the future. He is a proponent of solar, especially if you can use surfaces that don’t impact the cranberries. Because of solar, his parents will be able to stay on their farm for rest of their lives. The returns are enough to cover taxes, maintenance, etc. and takes away the stress. Steve even has a floating 50x50 array on his reservoir. It is another great tool for using parts of his property that he normally wouldn’t be able to use. He firmly believes we need to find sources of electricity that don’t have a carbon footprint.

Away from farming, Steve loves to ski and ventures to NH as much as possible. A father of twin daughters and a son, he enjoys watching movies on a Saturday night with family and friends.