2016 is the year three generations of Nantucket cranberry-men walked through fire to bring the bogs they’ve worked into the next era. Tom Larrabee Sr, Tom Larrabee Jr and his son Nick Larrabee had already transitioned the Windswept Bog to organic production for the better market, growing berries 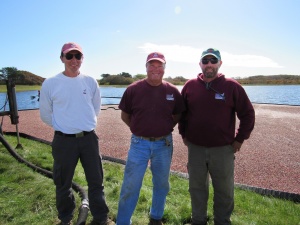 to make people well. Now they had taken an enormous challenge as they began the transition process at Milestone Bog located on the pristine moors of Nantucket, once the largest and arguably one of the oldest cranberry bogs in the world.

No one could have predicted the tragedy that would come in the spring and just how difficult the year would slog on for the Larrabee family. On April 16, Tom Larrabee Sr. died after being rescued from the mud of Hummock Pond. An outdoorsman, he was doing what he loved, exploring with his dogs looking for freshly exposed arrowheads and artifacts around the newly drained salt pond. He was 83 years young, had farmed on Nantucket all of his life and steered the good ship Windswept and Milestone for over 50 years 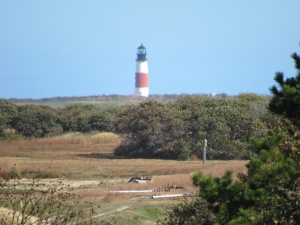 having come onboard as a teenager in 1950.

Tom Larrabee Jr, his son Nick, foreman Hristo Krastev and with great support from the owners of the property, Nantucket Conservation Foundation (NCF), moved ahead with their ambitious plan for the farm. Although the loss of their mentor is profound his imprint is everywhere.

Tom senior grew up on his family farm, and continued to farm adjacent to the moors while he worked on Milestone Bog as a kid. He was on those bogs through the post war years when they were all but forgotten and guided them through a series of owners. 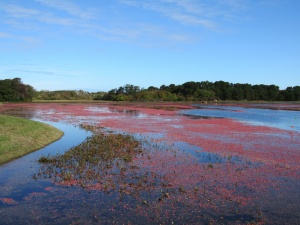 Finally in 1969 island residents Roy Larsen, Walter Beinecke and Arthur Dean purchased the Milestone Bog for the NCF as a way to generate money to support the foundation. In 1980 the foundation was able to purchase the Windswept bogs and became the owner of all of the 232 acres of producing cranberry bogs on Nantucket.

In the years that followed the bogs were leased to off-island cranberry growers including Northland Cranberry Company who abandoned the lease in the cranberry market crash of 1999. The constant figure throughout those challenging years was the stewardship of Tom Larrabee Sr., steady hands for the changes ahead. Without those steady hands, and 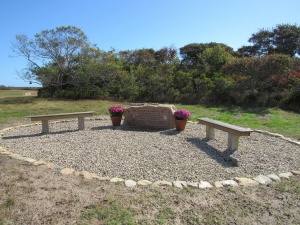 In 2003 Tom Jr. came home and took the helm for his father. After 13 years he says he is “a cranberry grower, mechanic, carpenter, and plumber” and he learned it all from his father. He can manage a crew and learned discipline and leadership from the Marines. He is grateful to both. And when he needs council he visits the beautiful overlook to the expanse of Milestone Bog, where a memorial dedicated to Tom Larrabee Sr. and NCF visionary Roy Larsen now sits. It is the place he and his father visited together often.

Protected by the Godfathers

It should be said at the outset that the rescue mission for these bogs would not have been possible without the vision of Roy Larsen and the continued dedication of the Nantucket Conservation Foundation. 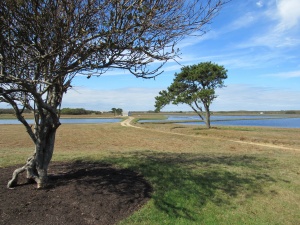 In the building boom of the 1960s Roy Larsen, Nantucket resident and retired vice chairman of Time Life saw the need to preserve the unique character of Nantucket and organized his friends and wealthy donors to purchase and protect farms and wildlands to be tucked under the protective wing of an established foundation. He also had the vision of acquiring the cranberry bogs on the island to conserve this unique Nantucket cranberry heritage despite the difficulties of commodity marketing and use the cranberry expressed at the purchase and gift of those bogs to the foundation. “Roy’s total fascination with the cranberry bogs was a mystery to me”, he admitted, then added his own home grown obsession with all things cranberry. 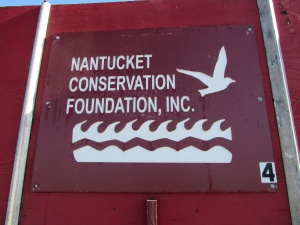 There is something so alluring about those particular bogs that figure so prominently in the natural heritage of the island. “Roy loved to drive out to that overlook on Milestone and enjoy a good cigar.”

Today, the Nantucket Conservation Foundation and its board of 12 directors protect over 9,000 acres of unspoiled beaches, moors, wetlands, cranberry bogs, sprawling farms and grasslands for everyone. The conservation lands are used to support environmental and wildlife research, sustainable farming and recreation. Over the years NCF has raised over $37 million for land acquisition and management and employs 18 people including 4 full time scientists. It takes full time fund raising and an army of members and volunteers to continue the NCF vision.

A Heritage in Crimson

In truth, cranberries have always been something more to Nantucket than on the mainland. They were life sustaining 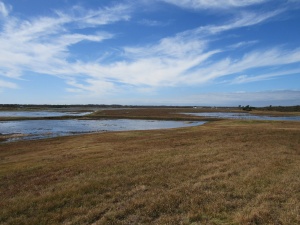 to Native Americans, to the first English settlers in 1659, through the blockade years during war, through long whaling voyages and the last surviving industry following the whaling and fishing decline. In 1880 Eastman Johnson painted the very famous “Cranberry Harvest on the Island of Nantucket” of a wild berry harvest that has come to symbolize the heart and soul of the New England industry. The print is featured on the cover of the Spinner Publication of “Cranberry Harvest” a history of Cranberry growing in Massachusetts; the original hangs in the Timkin Art Gallery in San Diego, CA.

Upon the moors, cranberries grew naturally and were collected by Native Americans and later by settlers, to eat, preserve food and for medicinal purposes. Even then the healing properties of cranberries were recognized. 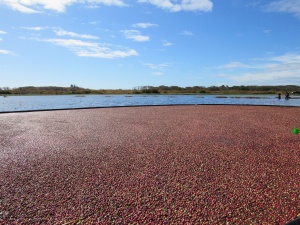 The soils were generally poor and game animals at that time, according to historian Amy Jenness, were no bigger than a rabbit. During both the revolutionary war and the war of 1812 shipping to and from Nantucket was disrupted by the British and the Patriots. Jenness reports the islanders were close to starvation at the end of those two wars sustained by fish, poor crops as well as nuts and berries collected from the wild.

On Nantucket and Cape Cod, emerging cranberry sales were associated with the nutritional deficiency of sailors at sea. By 1683, settlers were making juice from cranberries and realizing the benefits, by 1820 they were shipped to Europe and by 1850 they were widely used by long voyage whalers to prevent scurvy at sea. The collection and packing of berries in empty whale oil barrels was the well paid work of women and girls prior to the first ‘cultivated’ cranberry bog on Nantucket in 1857. As whaling came to a close, cranberry cultivation became the surviving island industry.

In 1904 William T. Makepeace planted a 10 acre “cultivated” cranberry bog on Nantucket and later expanded to include Gibbs swamp and what was to become the largest continuous cranberry bog in the world, Milestone Bog at 300 acres. Through much of the history of cranberry growing, the supply of berries has exceeded the demand and cranberry bogs have vanished from the landscape. Not however on Nantucket where moors, meadows and cranberry bogs remain indelible features of natural and human heritage, protected from the vagaries of fortune.

The cranberry market disaster in 1999 was followed shortly by a delayed aftershock that has lasted much longer, depressing cranberry prices for many growers at below cost of production, depending on market affiliation. Nantucket drew the short straw. Challenges for cranberry growers on the mainland are ever more acute on Nantucket where the high cost of transportation, 40 miles off-shore, raises the cost of farming exponentially. If that weren’t enough, the cost of housing on the island is too high to support a traditional farm labor pool.

Tom Jr. came home on the heels of the cranberry crash. In three years of neglect, parts of the bogs were overgrown with trees and his father was struggling with the help of a young assistant, 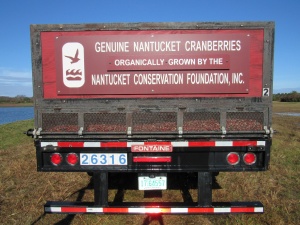 newly arrived Hristo Krastev, an engineering student from Bulgaria. It was immediately evident that in order for the bogs to continue, big changes were required. There had to be a better way to get that better price and so they made the decision to grow organically…and develop a better marketing strategy.

That was 13 years ago. October 8th Nantucket Cranberries celebrated their 13th annual harvest festival at the Milestone Bogs with an estimated attendance of 8,000. Attendees enjoyed bog tours, hayrides, family games, music and food. For islanders it was a chance to revel in the uniqueness of their place in time and future.

When Tom Jones retired from Ocean Spray he saw cranberries in the rear view mirror. Then he met a man from Nantucket on a Florida golf course. The story of the Nantucket Bogs, 230 acres of soon to be all organic cranberries supported by a Conservation Foundation and stuck in a lousy market position was a compelling challenge to Jones. 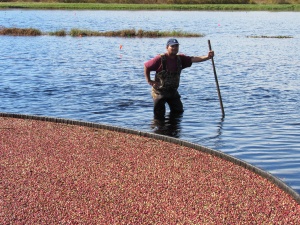 All of his marketing instincts told him this offered an incredible opportunity for niche marketing and idyllic branding, Nantucket Organic Cranberries.

Jones already knew all the uniquely great things about cranberries and he also knew that with a focus on the beverage industry, processors had largely neglected the emerging global interest in nutraceuticals. Even better, the heirloom varieties of berries with 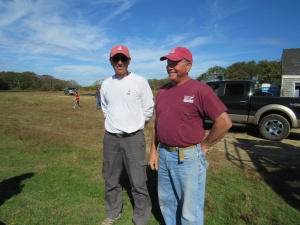 maximum health benefits, were just the varieties that are grown on Nantucket and now organically.

In 2012 Tom Jones took over the marketing of the berries on Nantucket for that particular brand development. They now market Nantucket Organic Cranberries fresh and organic cranberry sauce distributed in the Pacific Northwest under the Costco band and continue to develop market commensurate with the progression of organic production. He commented “cranberries are the best value of any of the super fruit, still underutilized by food formulators.” Tom Jones met a man from Nantucket and is bullish again on cranberries; Nantucket Strong!