Cape Cod Cranberry Growers’ Association (CCCGA) member Linda Rinta and the Rinta Family Farm of West Wareham have been selected by the Sand County Foundation as the recipient of the 2020 Leopold Conservation Award® for New England.  Given in honor of renowned conservationist Aldo Leopold, the prestigious award recognizes those who inspire others with their dedication to land, water and wildlife resources in their care. Rinta, an esteemed cranberry grower among the Association’s 300+ membership across the Commonwealth, is the first cranberry grower to be so honored.

“This award demonstrates the lifetime of work that Linda has achieved while growing cranberries and simultaneously making a positive impact on the land,” shares CCCGA Executive Director Brian Wick.  “From her work as a conservation farm planner, establishing pollinator habitat, working on creating our agricultural practices in the state’s Wetland Protection Act regulations to helping countless growers maintain and improve their farms, Linda has been a tireless advocate.  Her passion for cranberries and the environment are genuine. She is not afraid to stand up for both causes and embodies the viewpoint that agriculture and conservation go hand in hand. The award is a worthy recognition of her life’s work.” 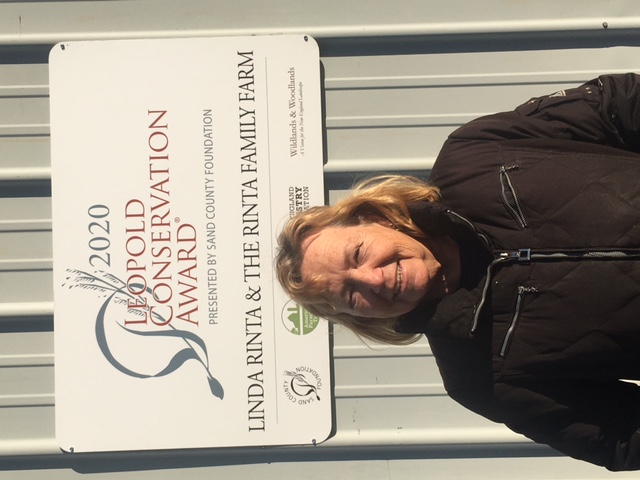 The Leopold Conservation Award recognizes and celebrates extraordinary achievement in voluntary conservation by private landowners, inspires countless other landowners by example and provides a prominent platform by which agricultural community leaders are recognized as conservation ambassadors to citizens outside of agriculture. The program helps strengthen the relationship between agriculture, government, environmental organizations, industry, and academia to recognize and advance the cause of private land conservation. The Sand County Foundation is named after one of the country’s most preeminent land conservation thinkers, Aldo Leopold, who wrote “A Sand County Almanac” in 1949 in rural Wisconsin. Leopold’s Book is considered the most influential conservation book ever written and is still a best seller today. In the book, Leopold writes that it’s an individual responsibility for private land management and recognized that a landowner’s profitability and economic growth are tied to conservation success.

The Leopold Conservation Award is presented annually by the Sand County Foundation, with support from a variety of conservation, agricultural and forestry organizationsApplicants for the award included owners of forestland and farmland throughout all of the New England states. Submitters were reviewed by an independent panel of agricultural and forestry conservation leaders. This year’s award was made possible through the generous support of American Farmland Trust, New England Forestry Foundation, American Farmland Trust-New England, The Wildlands and Woodlands Initiative, Farm Credit East, David and Ann Ingram, Yale School of the Environment and Whole Foods Market.

“What distinguishes Ms. Rinta is not only her long history of sustainable land stewardship but also her achievements in educating others and making it easier for other stewards to follow their dreams and connections to the land,” said Bob Perschel, Executive Director of New England Forestry Foundation. “It’s also wonderful to see this award going to a conservationist who farms cranberries, a crop that’s strongly associated with New England, in a way that protects the New England environment.”

For more information on The Leopold Conservation Award, visit leopoldconservationaward.org.